Essay by Olafur Eliasson
In his essay, the artist Olafur Eliasson reflects, poetically and intellectually, on his artistic practice and its driving force. Based on his solo exhibition Y/our future is now, abstract and concrete elements are entwined and his thoughts on the climate, time, movement, place/space and material – and how all these things are interdependent – are presented in a very tangible and sensuous manner.

Olafur Eliasson’s art is driven by his interests in perception, movement, embodied experience, and feelings of self. He strives to make the concerns of art relevant to society at large. Art, for him, is a crucial means for turning thinking into doing in the world. Eliasson’s works span sculpture, painting, photography, film, and installation. Not limited to the confines of the museum and gallery, his practice engages the broader public sphere through architectural projects, interventions in civic space, arts education, policy-making, and issues of sustainability and climate change.
Eliasson was born in 1967. He grew up in Iceland and Denmark and studied from 1989 to 1995 at the Royal Danish Academy of Fine Arts. In 1995, he moved to Berlin and founded Studio Olafur Eliasson, which today comprises a large team of craftsmen, architects, archivists, researchers, administrators, cooks, programmers, art historians, and specialised technicians. 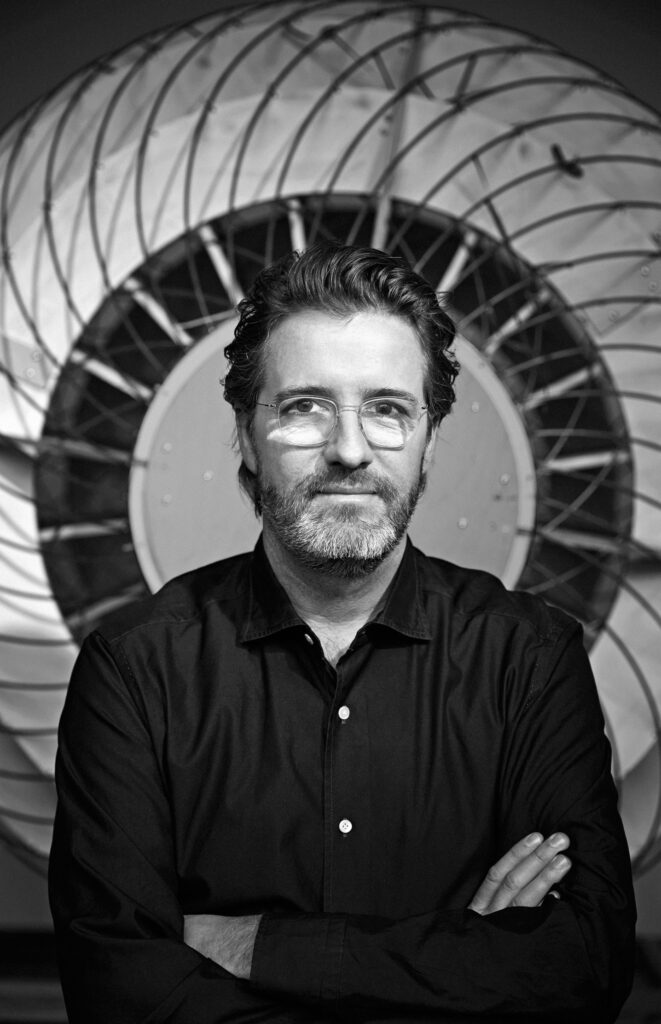 On the surface of a globe, the shortest path from one place to another is not a straight line but a curve – a geodesic arc. The further you travel, the more extreme this arc becomes, but even the relatively short air trip from Berlin to Porto takes me along a gentle curve that lasts a little over three hours.

During my journey, I might peel an orange, pulling the skin off along a spiral as one does. Interestingly, this is the same curve studied by the eighteenth-century monk and mathematician Guido Grandi, who named it the Clelia curve. The relationship between how we travel and measure the surface of a sphere – whether it is an orange or the earth – has inspired me to create some studies at my studio, together with my geometry team, and led to a new body of works, three of which are now in the park at Serralves. Titled Human time is movement and differentiated by the subtitles spring, summer, and winter, these free-standing, black-and-white spirals were created by mapping a point as it moves simultaneously along several axes of a sphere. When you encounter the works in the park, you will not be able to take them in fully if you look at them while standing still, without movement and time. Our ability to sense depth and understand dimensions is intensified through physical motion, and you may, in fact, feel the urge to move around the artworks and trace the spirals’ paths. The narrative of the artworks emerges from this movement; you reconstruct – physically and in your mind – the sculptures’ creation, their emergence in space and over time. Through this process, our bodies become invisibly linked to them – we become co-sculptural. Add the rays of the sun, and the shifting shadows on the ground act as a counterpoint to the immobile sculptures. This complex dialogue of spirals, shadows, and visitor movement calls for engagement over time, while, perhaps, amplifying your experience of the here and now. You may realise, then, that the space is a consequence of your engagement and co-shaping of it. The Clelia sculptures host an opportunity to make space and time felt, present, explicit.

The simple action of peeling an orange allows us to come into contact with history and the globe. Thich Nhat Hanh, a Buddhist teacher, talks about this process as an act of meditation: ‘If you eat an orange in forgetfulness, caught in your anxiety and sorrow, the orange is not really there. But if you bring your mind and body together . . . , you can . . . see the orange blossoms in the orange, and the rain and the sun that have gone through the orange blossoms.’ By attuning my awareness, I gain access to the fruit’s history while peeling it – and, through it, discover the past of the weather and the climate. The eco-feminist and post-humanist theorist Donna Haraway has suggested that we should ‘unpack’ objects by inquiring into the networks that even the simplest of them are part of in order to learn about their entanglement with the world: ‘I would ask people . . . to take a chocolate croissant and lead me through flour and chocolate and butter and sugar and coffee and connect us to world histories that way’. And she probes into economic, epistemological, technical, material, and political stories. In Haraway’s view, then, I can also perceive the orange as an economic object travelling from Portugal to Berlin, Copenhagen, or Reykjavik, enabled by global trade agreements, and thereby producing a carbon footprint – a system in great need of re-engineering.

Before the invention of steam engines, the main routes for transport and travel on the seas closely followed the winds and currents, indicated as a web of lines on early navigational charts. These currents still shape and affect our climate: the Gulf Stream brings the warm waters of the Gulf of Mexico across the Atlantic Ocean to Europe, making Porto’s climate, for example, warmer than it would otherwise be at such a latitude. Once cooled, the waters flow back to the south, completing one of the five major ocean gyres that distribute weather and heat around our planet. The gyres are massive vortices, related to the structure at the centre of The curious vortex, the new pavilion work that I have installed in the park of Serralves. Similarly, currents circulating around the Arctic carry driftwood from Siberia to the shores of Iceland, Greenland, Canada, and Alaska. These migrant logs became an important building material in Iceland, as the early settlers effectively deforested the country hundreds of years ago. The driftwood logs carry stories, are a product of the currents and the waters that have chafed them over time. Scientists have also ‘unpacked’ them, in Haraway’s sense of the word, gathering data about past sea ice and the Arctic climate reaching back 250 to 500 years. Since 2008, I’ve periodically collected these logs from beaches in Iceland and brought them to my studio in Berlin. I have distributed the logs around cities, leaving them stranded in public space, or cut them, combined them, and painted them for use in other artworks – these logs that have travelled in the ocean for so long, been exposed to sun twenty-four hours a day in the summer months. You may come upon some of them in the park outside Serralves, where they lie, stranded, as if they had been carried by the receding tide or tossed ashore by a maelstrom. The painting on one side, reminiscent of the waterline that runs the length of a ship’s hull, makes them resemble beached boats. Marooned, they appear silenced. But the journey is not over, they have merely changed routes.

Vortices, cycles, and currents run through Y/our future is now – outside in the driftwood, the Human time is movement spirals, and The curious vortex; inside in the floating rings and infinite regresses of The listening dimension, and in the circular grove of trees called Yellow forest, which reaches towards the ceiling, bathed in monofrequency light. These cycles, and the rings of The listening dimension especially, host the idea that the shape of anything is part reality and part imagination. It is about our ability to imagine a better tomorrow. Visitors encounter and co-produce the work as they circulate around the exhibition. Meeting within these spaces, inside the building and in the park, trajectories cross and are affected by each other’s presence; we all dance in the gravity of somebody else.

Gravity, according to physics, is geometrical: space-time is curved, and if we could warp it even further, we could create a wormhole and travel back in time. But let’s not look to the past to define the present. Our now has become defined by the future. Projections about the consequences of our actions today have begun to inform and guide our lives. This is new. The worldview of my generation and of the generations before me was defined by the visions of yesterday, of consumerism, growth, and wealth accumulation – and I cannot pretend to be exempt from this view. We saw the present through the lens of what came before it. We expected the world to be predictable and the future to be based on the past. Today, in the age of the Anthropocene, it has become clear that attitudes must change – the present and the future are becoming ever more unpredictable. Nature is no longer ours to exploit (it never was); we are part of it. It’s clear now that we cannot continue living as we had in the past, and that all aspects of society will have to adapt to the climate crisis. Much of what we take for granted today as normal activity and do on a daily basis will become obsolete or even illegal in ten years’ time. The younger generation knows this. They have begun viewing the present in the light of a future that they themselves must shape here and now. This is not only about living ecologically; it is also about our sense of justice. This is why more and more people are taking to the streets to protest the lack of climate action by governments – children and teenagers are speaking up and climate activist groups are blocking bridges and staging ‘die ins’, using their bodies as tools in public space to disrupt business as usual.

To return once more to the orange at hand: I break it into its ten segments and offer half to my neighbour. Roland Barthes, writing in A Lover’s Discourse about the twinge of jealousy felt by a lover watching his beloved share slices of an orange with others, noted that ‘The world . . . is an obligation to share.’ This obligation, for us, is an injunction to act in common to protect our shared planet. It would be a mistake, however, to limit our understanding of sharing to our own species. Instead, we need to, in Haraway’s words, ‘make kin’ with other species, other life forms, and even with the non-living matter – the ice, water, air, minerals, and dirt – threatened by the climate emergency. Y/our future is now.

This essay was previously published in Y/our future is now, the catalogue for Eliasson’s eponymous solo exhibition presented at the Serralves Museum of Contemporary Art in Porto, Portugal, 2019–2020.